Case manager Michael and the Fire and Rescue NSW claims team have been shortlisted in the Excellence in Personal Injury and Disability Awards in the category of Excellence in Customer Service.

“The most rewarding part of my work is seeing firefighters reach their health and work goals – getting back to their normal lives” Michael said. 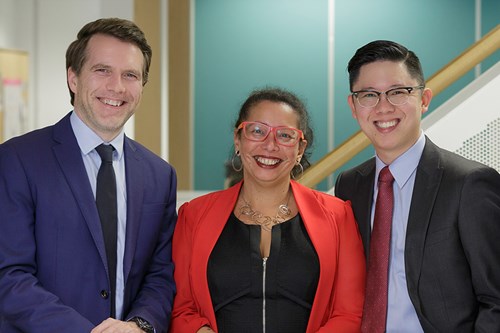 Michael (right) and the EML Fire and Rescue NSW claims team have been shortlisted for the PIEF Excellence in Customer Service Award. The team is led by Team Leader Carmen (middle) and supported by specialists such as Legal Manager Chris (left).

In partnership with Fire and Rescue NSW, Michael and the EML team proactively implemented and enacted new presumptive legislation that enabled better access to support for firefighters with cancer.

“Instead of waiting for the firefighters to express challenges or enquire about possible supports, we would explain all entitlements upfront. It was important for us to take the initiative to resolve problems” Michael said.

Before the legislation came into effect, NSW Firefighter Carl had been self-funding his cancer surgery and treatments.

“When the legislation ascended, we got straight to work on Carl’s claim and around 20 others like it” Michael said.

Carl’s medical costs were reimbursed, and he could access physiotherapy to support his recovery.

“I had a really good support team. Not having the financial burden looming over me meant I was able to return to work more focussed” Carl said.

The Personal Injury Education Foundation (PIEF) Injury and Disability Management Awards celebrate and showcase the outstanding achievements of our industry. More than 130 nominations were submitted across nine award categories. Award winners will be announced in the coming weeks.

“It is both humbling and satisfying to have been shortlisted for this award” Michael said.

Michael’s goal for the future is to continue his education, “I want to further understand the psychosocial effects of injuries, which I believe will significantly improve positive customer engagement and experience” Michael said.

Visit the PIEF 2021 website Awards page for more information on finalists across all categories. Discover all the EML finalists in the PIEF 2021 Awards in our Latest News.