Following a joint announcement between Western Bulldogs Club Officials and EML, CEO Mark Coyne spoke of the positive benefits which this partnership will deliver.

“A key part of our business is building awareness around workplace health and safety and positive return to work outcomes. The Western Bulldogs provides us with an exciting opportunity to not only raise awareness of our brand, but also these key issues for workers, employers and communities at large,” said Mr Coyne.

Just as EML has been helping people get their lives back for over 100 years, the Western Bulldogs have a built a proud heritage of representing their club members and supporting the western region community over many years.

EML’s partnership with the Bulldogs will also include support and involvement with the Club’s community initiatives such as its Sons of the West health program; an initiative which is supporting men living and working in Melbourne’s western suburbs to lead healthier lives. 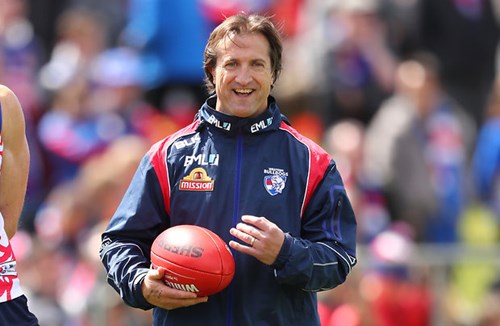 “It is this mutual heritage of ‘giving back’ that defines the partnership we have forged between the Western Bulldogs and EML, and we are excited to be a partner of the Bulldogs", added Mr Coyne.

The partnership between Western Bulldogs Club Officials and EML will have its first appearance in Round 13 on June 18 against Geelong, where the Western Bulldogs will promote their White Ribbon pledge during the game’s broadcast.

The Western Bulldogs have proudly partnered with anti-domestic violence campaigners, White Ribbon to help address the growing problem of violence against women in our community.

Click here to read the full announcement from the Western Bulldogs