EML were proud recipients of two awards at the  icare NSW 2016 Care and Service Excellence (CASE) Awards in Sydney on Thursday 15 September, 2016.

EML won awards for Outstanding Contribution by a Team and Service to icare Self Insurance.

Greg Waddington and the TMF Recovering Independence Service (RIS) Team accepted the award for Outstanding Contribution by a Team for their work on Behavioural insights which trialled new approaches to case management.

Deborah Leaf-Milham and Sachee Singh on behalf of the TMF D&D Team, accepted the award for Service to icare Self Insurance for the D&D Project that is delivering improved outcomes for emergency service workers.

Gerard McDermott, Group Executive Managed Funds at EML said, “these awards showcase outstanding team work and innovation across our industry and we are immensely proud to be a part of a collective who are actively transforming personal injury services for the benefit of employers and their workers.” 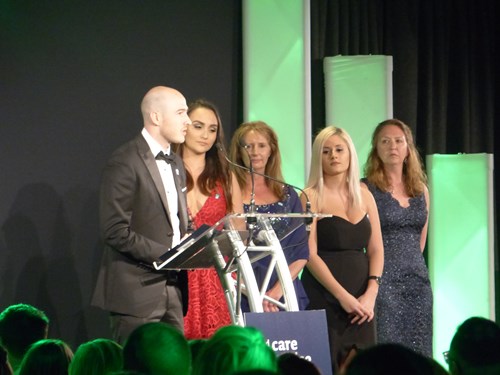 Photo: Greg Waddington and team accepting the award for Outstanding Contribution by a Team